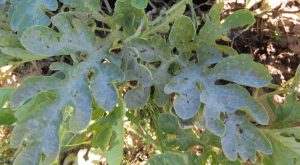 Cucurbit powdery mildew is caused worldwide by the fungal pathogens Podosphaera xanthii and Golovinomyces cichoracearum. Podosphaera xanthii is more common¹ and, apparently, may be the only one on cucurbits in North America². Early symptoms of powdery mildew include small, circular, yellow lesions on leaves and petioles. Lesions quickly become covered in white spores and may appear also on the underside of the leaf. The pathogen may be entirely restricted to the undersides of leaves in areas with intense sunshine, e.g., Imperial Valley, California. As disease progresses the entire leaf and petiole surface may become covered in the characteristic white powdery powdery spores that may also be found on peduncles (stems) and fruit. Powdery mildew affects all cucurbit crops such as cucumber, melon, squash, and watermelon.