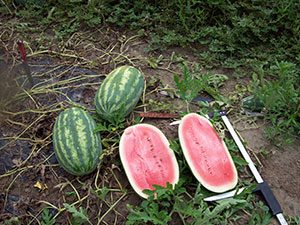 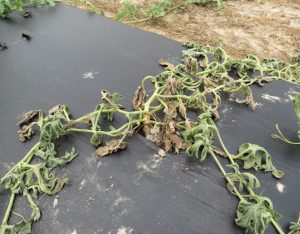 Fusarium wilt of watermelon is caused by Fusarium oxysporum f. sp. Niveum Fon. It is considered one of the most important diseases of watermelon production in the United States. There are currently no economical or even viable chemical control strategies or methods that can control this soil-borne pathogen. Fon race 1 is considered the most prevalent in the USA while race 2 is the most virulent. To date, only a few watermelon lines have been identified and reported as resistant or tolerant to this pathogen. Unfortunately, although some of these lines were reported more than twenty-five years ago, no commercial cultivar is available with resistance to the most serious of the races of this fungus, race 2.

We have identified and developed Citrullus lanatus var. citroides (Clc) germplasm lines derived from United States plant introductions (PIs) with high levels of resistance to Fon race 1 and 2, USVL246-FR2 and USVL252-FR2 (Wechter et al. 2012; 2016). Genetic populations are being used for genetic mapping and the identification of quantitative trait loci (QTL) associated with resistance to Fusarium wilt (Lambel et al. 2014; Branham et al. 2016). The molecular markers tightly linked to resistance to Fon race 1 and race 2 will be further developed and used in breeding programs of watermelon. 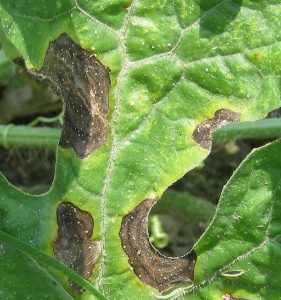 Gummy stem blight (GSB) was reported for the first time in the United States in 1917, affecting watermelon fruit from Florida (Sherbakoff, 1917). GSB on watermelon plants is evident as crown blight, stem cankers, and extensive defoliation, with symptoms observed on the cotyledons, hypocotyls, leaves, and fruit (Maynard and Hopkins, 1999). The pathogen is seed-borne (Lee et al., 1984), air-borne (van Steekelenburg, 1983), and soil-borne (Bruton, 1998; Keinath, 1996), making control important for the seed industry.

Recent molecular studies showed that GSB is not caused by a single pathogen, Stagonosporopsis cucurbitacearum (syn. Didymella bryoniae), but by three distinct species that also include S. citrulli, and S. caricae (Stewart et al., 2015), with the latter two species commmon on watermelon in the Southeastern U.S. C. citrulli stains are generally resistant to strobilurin (group 11) fungicides, but sensitive to Demethylation-inhibiting (DMI) (Group 3) fungicides, but DMI resistant strains of C. caricae have been identified (Li et al., 2016)

Despite numerous studies describing GSB resistant watermelon germplasm (Boyhan et al., 1994; Gusmini et al., 2005; Sowell, 1975; Sowell and Pointer, 1962), and efforts to introgress this resistance into commercial cultivars (Norton, 1979; Norton et al., 1986), currently no commercial cultivars of watermelon (Sumner and Hall 1993) have been released that have high resistance to natural epidemics of GSB in the field. Introgression is complicated because many of the sources of high levels of resistance are C. amarus, a crop wild relative (CWR) of the sweet, edible watermelon types. Introgression from C. amarus is hampered chromosomal re-arrangements and linkage drag. Through re-screening of previously described resistant accessions, we have selected line UGA1081 (PI 482276, Citrullus amarus, high resistance) and UGA161 (PI 526233, C. lanatus; intermediate resistance) as sources of resistance for introgression into elite watermelon germplasm.

Phytophthora capsici, the causal agent of Phytophthora fruit rot of watermelon and other cucurbits, is responsible for serious pre- and post-harvest yield and quality losses in the production of watermelon, as well as a number of other important vegetable crops in the United States (Kousik et al., 2016). In watermelon, fruit rot is often the most damaging symptom caused by P. capsici. It begins as a dark, water-soaked, depressed lesion that expands quickly along with powdery, wet mold progressively developing over the infected area and eventually the entire fruit rots. The disease is very prevalent on watermelon crops in the southeastern states (FL, GA, SC, NC and VA) and more recently in other parts of the U.S. (e.g. MI, DE, MD, IN) (Kousik et al., 2016). A significant portion of the U.S. watermelon production occurs in the southeastern states where environmental conditions are favorable for fruit rot development occur regularly during the growing season.

In our breeding program we are using USVL531-MDR (derived from PI 494531) and USVL003-MDR which are highly resistant to Phytophthora fruit rot and powdery mildew but with white flesh and low brix (<1.5 %TSS) and crossing it with susceptible lines with high brix and red flesh to develop red fleshed Phytophthora fruit rot resistant lines. A similar approach is being used to develop red fleshed powdery mildew resistant lines for release to the seed industry. We are also conducting concurrent genomics studies will facilitate the creation of tools for resistance breeding. 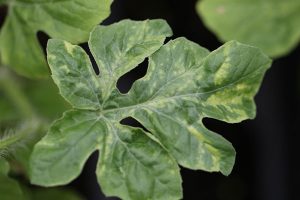 Cucumber green mottle mosaic virus (CGMMV) is a tobamovirus, similar to Tobacco mosaic virus (TMV).  This virus was first discovered in Europe and has caused serious epidemics in several Asian countries, including China, Japan, Korea and Israel. Due to its seed-borne nature, its geographic distribution is increasingly expanding in recent years due to off-shore seed production and global seed trade. CGMMV has been identified as an emerging virus on cucumber, melon, watermelon and other cucurbit crops in Canada and the United States (Ling et al., 2014; Tian et al., 2014) and Australia. It poses serious threat to the entire cucurbit industries in the U.S. and around world.

The phenotype data obtained from this disease resistance screening for CGMMV will be used for evaluation of SNPs in association with the CGMMV resistance through genome-wide association study (GWAS), in collaboration with CucCAP collaborators.

Papaya ringspot virus (PRSV), along with Watermelon mosaic virus (WMV) and Zucchini yellow mosaic virus (ZYMV), are potyviruses that are common viral diseases in watermelon and other cucurbit crops in the United States and around the world. These viruses are efficiently transmitted in fields by aphids in a non-persistent manner, thus making insecticide application not effective for disease control. The most effective and economic management strategy would be through the use of a disease-resistant cultivar. Although current watermelon cultivars are susceptible to PRSV infection, several sources of watermelon germplasm with resistance to PRSV have been identified (Levi et al., 2016). In the current study, we are developing genetic segregating populations to determine the genetic inheritance of resistance and using the genotyping-by-sequencing (GBS) technology to identify SNPs in association with the resistance locus, in an effort to develop molecular markers for marker-assisted selection.

(images provided by K. Ling and A. Levi) 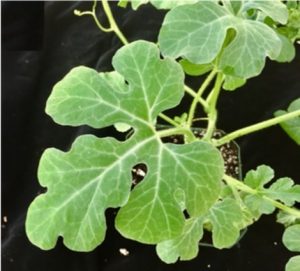 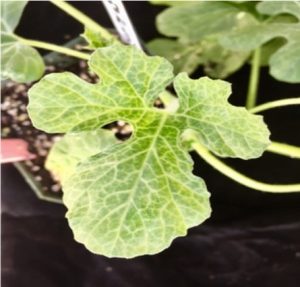 PRSV symptoms on leaf; Image provided by K. Ling and A. Levi 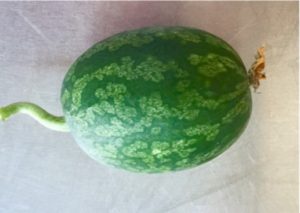 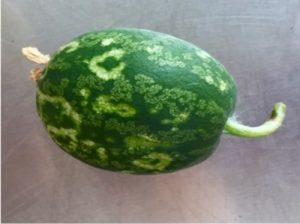 PRSV symptoms on fruit; Image provided by K. Ling and A. Levi