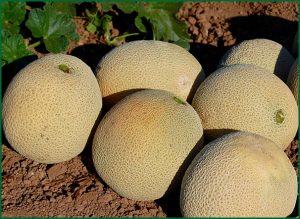 Draft genome sequences for melon (Cucumis melo) were established in 2012. Breeding for specifics disease resistances in melon are underway in labs, greenhouses and fields in South Carolina, California and Arizona. A Melon Core collection of 384 lines will be established

DNA of available melon accessions in the U.S. National Plant Germplasm (2038 accessions including some heirlooms) has been sampled from greenhouse-grown plants. A Melon Core collection will be established based on the GBS analyses. Seed of the accessions included in the Melon Core will be produced for distribution through USDA-NPGS-GRIN.

Fusarium wilt of cucurbits, caused by the fungal pathogen Fusarium oxysporum, is one of the most devastating of all cucurbit soil-borne diseases. Fusarium wilt of melon is caused by Fusarium oxysporum f. sp. melonis (FOM), and is considered one of the more important diseases of melon in the United States (Wechter et al., 1995; Zuniga et al., 1997). This pathogen also causes severe losses in a number of other countries, including those in South America (Erzurum et al., 1999) and Europe (Belisario et al., 2000), Republic of South Africa (Schreuder et al., 2000), and Japan (Namiki et al., 2000). There are currently no economical or even viable chemical control strategies, or other methods that can control this soil-borne pathogen. Four races of FOM have been described in melon: 0, 1, 2, and 1,2 based on resistance genes. Two variants of race 1,2 have been identified: 1,2y, which induces yellowing reaction, and 1,2w, which induces wilting response (Zink and Thomas, 1990). Genetic studies on inheritance of resistance to the different races of Fom (Risser et al., 1976; Zink and Thomas, 1990), as well as identification of genetic markers associated with these resistances have been described (Ficcadenti et al., 2002; Joobeur et al., 2004; Tezuka et al., 2009; Wang et al., 2000; Wechter et al., 1998; Wechter et al., 1995; Zheng et al., 1999). Joobeur et al., (2004) identified and described the Fom-2 locus, which confers resistance to Fom race 1. Tezuka et al., (2009) mapped the Fom-1 locus, which confers resistance to race 2. No reports have been published to date of QTL analysis for additional, minor gene loci involved in FOM resistance to these two races.

PI 124111 and its derived line, MR-1, are highly resistant to FOM races 0, 1, and 2. MR-1 also possesses significant resistance to a number of other diseases, including powdery mildew, Alternaria leaf blight and downy mildew (Thomas, 1982; Thomas, 1985; Thomas, 1986). The unique resistance qualities of MR-1 make it an extremely important line for studies of resistance and as a donor for introgression of resistances into susceptible lines and cultivars. MR-1 was crossed with the sweet Israeli cultivar ‘Ananas Yok’neam’ (AY). AY is susceptible to many plant pathogens including FOM, and the causal agents of downy mildew, powdery mildew, and Alternaria leaf blight(Thomas, 1982; Thomas, 1985; Thomas, 1986). The cross of MR-1 and AY initiated transfer of FOM resistance to sweet melons. A recombinant inbred line (RIL) population, derived by single seed descent from the F2 population was developed from this cross. Two hundred RILs F8 to F10 have been generated for molecular studies and breeding work associated with this project. A subset of this RIL population was used to identify QTL associated with Alternaria leaf blight resistance (Daley et al., 2017). This population is being evaluated for resistance to FOM races 1 and 2 in Charleston, SC.

Powdery Mildew (PM; incited on melon in the U.S. by Podosphaera xanthii) is a constant threat to melon production in every growing region. Resistance breeding was initiated by USDA in the 1920s (Whitaker and Jagger, 1937) and continues through the present due to the emergence of new races that overcome resistance genes (McCreight et al., 2012). Melon powdery mildew races 1 and 2 are important in the eastern U.S. (C.S. Kousik, unpublished) and Texas (K.M. Crosby, personal communication). Races 1 and 2 occur in California and Arizona, but three other races are known there as well: 3.5 (Woodland-Davis, CA), 5 (Five Points, CA), and S (Imperial Valley, CA and Yuma, AZ) (McCreight, 2002). A survey of powdery mildew races in California was done in 2015 and 2016. Read more about Cucurbit Powdery mildew at the  Melon Powdery Mildew Database at University of California Riverside.

PI 124111 exhibits high-level resistance to PM races 1, 2, 3, 4, 5, and twelve Czech races, but is susceptible to races 3.5, S, and SD (McCreight et al., 2012). Melon breeding line MR-1 was selected from PI 124111 for uniform reaction to downy and powdery mildews; when released it was known to be resistant to powdery mildew races 1, 2, and 3 (Thomas, 1986). A recombinant inbred line (RIL) population from a cross of MR-1 with the powdery mildew susceptible cultivar Ananas Yok’neam (AY) has been advanced to the F8 to F10 generation. This population is being evaluated for resistances to races 1 and 2 in Charleston, SC, and race 5 in Five Points, CA. Genetic analyses (Mendelian and QTL) will be done for resistances to these three races. Selected multiple race-resistant RILs will be introgressed to western U.S. shipper type and eastern type cantaloupes. 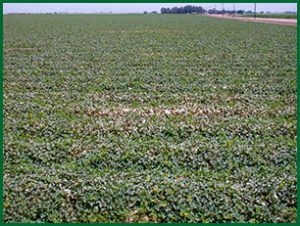 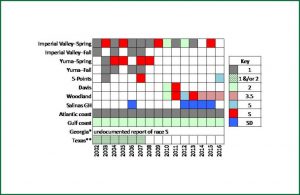 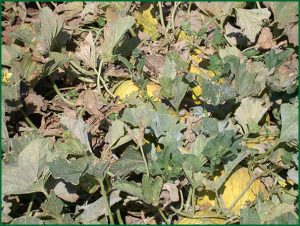 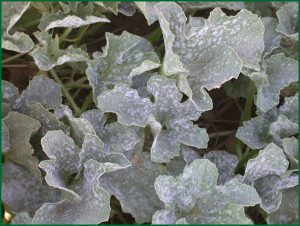 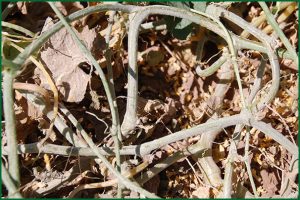 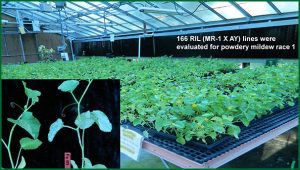 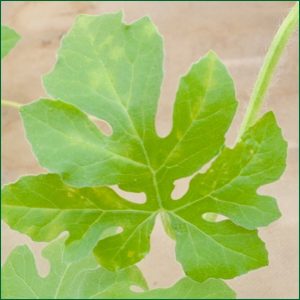 Cucumber mosaic virus (CMV) is distributed world-wide and can occur wherever cucurbits are cultivated. The virus is transmitted by more than 80 species of aphid (Gallitelli , 2000), and can be acquired and transmitted during brief, superficial probes of plants (Martin et al., 1997). CMV has an extensive and broad host range among crops and weeds, including more than 1200 species in 100 plant families (Zitter and Murphy, 2009). CMV has affected melon in the U.S. for more than 100 years, including Yuma, AZ and the Central Valley of Arizona (Coudriet, 1962; Gilbert, 1916). Cucurbit hosts differ in their susceptibility to CMV, with melon, cucumber, pumpkin and squash affected more severely by the virus than watermelon. Foliar symptoms on infected cucurbit plants include yellow spotting (Fig. 1), downward bending of petioles, and curling of leaves. As symptom development progresses, plants develop mosaic symptoms (Fig. 2), more extensive leaf curling, and sometimes leaf deformation. Fruit symptoms vary among cucurbits as well as by genotype, ranging from asymptomatic to severe rugosity (roughness), and occasional color breaking. Fruit quality and marketability are often reduced (Zitter and Murphy, 2009). Symptoms on cucurbit plants can resemble those caused by viruses of other genera, particularly those of the genus Potyvirus; therefore confirmation with serological or molecular methods is needed for correct identification.

The genome of CMV consists of three separate RNA molecules approximately 29 nm in diameter, each packaged separately into virus particles (virions) (Lot and Kaper, 1976). CMV symptom severity can be influenced by satellite RNA molecules that become associated with some CMV isolates. These satellite RNAs are fully dependent on CMV for replication, and they are packaged in CMV virions and can be transmitted plant-to-plant by aphid vectors along with the virus. The presence of satellite RNAs with CMV can lead to increased or decreased symptom severity (Francki 1985; Palukaitis, 1988).

Resistance in ‘Freeman cucumber’ (C. melo Group Conomon) was reported to be controlled by three recessive genes that resulted in lower virus titer than in the susceptible parent, the honeydew ‘Noyamid’ (C. melo Group Inodorus); the F1 was intermediate for virus titer (Karchi et al., 1975). Breeding for resistance to CMV is challenged by numerous strains able to overcome resistance genes that provide resistance to other strains (Lin et al., 2003). There are as of yet no commercially available CMV-resistant (CMVR) melon cultivars adapted to the western production areas. The California Melon Research Board supported a breeding project at Cornell in the 1990s to develop western U.S. shipper type melons (cantaloupe and honeydew) that culminated in the release of CMV-tolerant (CMVT) breeding lines selected for lack of symptoms and/or marketable fruit production despite foliar symptoms.

Pedigrees of the CMVT Cornell melons are diverse, with tolerance derived from combinations of the following three sources: Freeman cucumber and PI 161375 (Group Chinensis), which are tolerant to CMV and Watermelon mosaic virus (Enzie, 1943; Pitrat, 1978), and KCMR, which was received by Dr. H.M. Munger in 1978 from Z. Karchi (ARO, Neve Ya’ar, Israel).

Melon production is threatened by the crinivirus CYSDV in areas favorable to its vector, the sweetpotato whitefly, Bemisia tabaci Gennadius. At least three cryptic species of B. tabaci: NW1, MEAM1, and MED (formerly known as biotypes A, B, and Q, respectively) have been shown to transmit the virus (Célix et al., 1996; Wisler et al., 1998), although it is likely other cryptic species of B. tabaci can transmit CYSDV as well. The virus is not transmitted mechanically, by seed, or by other known methods. 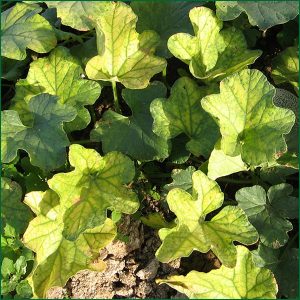 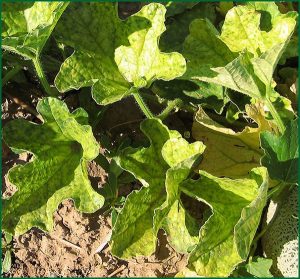 The most recognizable symptoms of CYSDV include leaf yellowing and chlorosis between the veins (Fig. 1), but early symptoms can also include chlorotic mottle (Fig. 2). Symptoms first appear on older leaves about three weeks after initial infection, and spread acropetally (Fig. 3) (Célix et al., 1996; Wintermantel et al., 2009). Infected plants may become completely chlorotic (Fig. 4). There is a latent period of about three weeks during which CYSDV-infected plants are asymptomatic, but the virus is increasing in titer and moving through the vascular system from which it can be acquired and serially transmitted by whiteflies to new growth of infected plants as well as to neighboring plants  It is, therefore, not recommended to move cucurbits from areas with active CYSDV infections even if plants are not exhibiting symptoms. 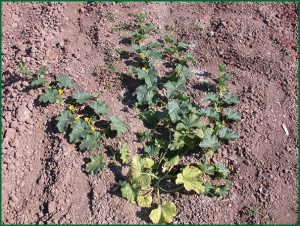 Figure 3. CYSDV-infected plant exhibiting typical pattern of symptom expression that appears at the crown and develops acropetally, and in the case of early infection can result in 100 % yellowing of the of the plant. The older leaves are often thinned and brittle. Image provided by Jim McCreight, USDA-ARS. 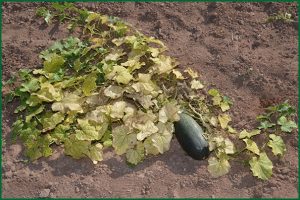 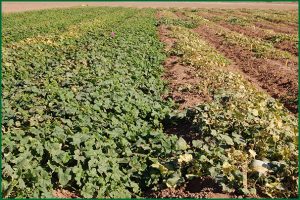 CYSDV first appeared on melon in 1982 in the United Arab Emirates (Hassan and Duffus, 1991) and then spread throughout the Mediterranean basin, reaching Spain by 1989 (Célix et al., 1996; Sese et al., 1994). The virus appeared in the lower Rio Grande area of Texas and the adjoining area of Mexico in 1999 (Kao et al., 2000) and later emerged in lower deserts of the southwestern U.S. (Yuma and central Arizona, and Coachella, Imperial and Palo Verde Valleys of California) and western Mexico during the Fall season of 2006 (Wintermantel et al., 2009) followed by Florida in 2007 (Polston et al., 2008). The virus has also been reported in China (Liu et al., 2010).

CYSDV can infect and cause disease symptoms on many members of the Cucurbitaceae, including melon, watermelon, squash, pumpkin and some wild cucurbits (Wintermantel et al., 2009). The virus also infects a number of weeds common to regions where melons are produced, and these non-cucurbit host plants vary as sources for transmission of CYSDV to cucurbit hosts by whiteflies (Wintermantel et al., 2016). Most geographically distant isolates of CYSDV are highly conserved genetically, suggesting recent spread of the virus in most regions, however a divergent Eastern group of isolates from Saudi Arabia, Iran, and Sudan has been identified as well (Mohammed et al., 2014; Rubio et al., 2001; Yakoubi et al., 2007).