This aphid-transmitted virus can infect and produce symptoms on all commercially grown cucurbits. This virus causes milder symptoms on the foliage of most infected plants. Growers have seen a lessening of foliar symptoms following fertilization. Fruit distortion and color breaking are still a problem on varieties like yellow straight-neck squash. Use of varieties such as ‘Multipik’  can prolong the harvest period because the fruit are marketable in spite of foliar symptoms. The host range for WMV-2 is not limited to cucurbits, thus opening the possible overwintering of this virus in several leguminous species such as clover. Mixed infections of cucurbits with CMV and WMV-2 are common by the end of the season. The foliage of affected plants shows strong mosaic, distortion, and deep leaf serration. Fruits are also malformed with knobby overgrowth. 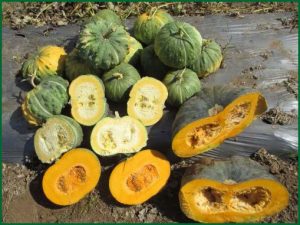 According to the  American Phytopathological Society, Papaya ringspot virus (PRSV) infects cucurbits systemically. Leaves show intense mosaic with a narrowing of the leaves.  Severe cases can result in a shoestring effect similar to what is observed in papaya.  Plants that become infected at a young age do not develop a crop.  Older plants that become infected do produce fruit that often show distinct changes in color and are deformed.  For example, a yellow crook neck squash would have many green blotches and bumps.

This recently described virus disease of cucurbits, first identified in Europe in 1981, has been reported from most southern and southwestern states and was found in New York State in 1983. The virus has characteristics very similar to WMV-1 and WMV-2 (nonpersistent aphid transmission, etc.), and like WMV-2, its host range is not limited to cucurbits. Currently, none of the genetic factors that confer resistance to WMV-1 or WMV-2 are able to control ZYMV, but other resistance sources have been identified. Muskmelon, watermelon, and squash are severely affected by ZYMV. Foliar symptoms consist of a prominent yellow mosaic, necrosis, distortion, and stunting. Fruits remain small, greatly malformed, and green mottled, including fruit of the variety ‘Multipik’.

Cucumber mosaic virus (CMV) is probably the most widely distributed and important virus disease of cucurbits in New York. The virus overwinters in many perennial weed sources especially attractive to aphids when weed growth resumes in the spring. Early infection of squash and melons is particularly common. Aphids are the main and most efficient method of virus spread. Summer squash displays severe downward cupping along the midvein and leaf reduction from which the plants fail to recover (fig. 3). Color breaking of squash fruit is usually seen, but is not unique for this virus; other viruses causing this symptom include watermelon mosaic viruses 1 and 2, squash mosaic virus, and zucchini yellow mosaic virus. Early decline of muskmelon vines is usually attributed to CMV infection and should not be confused with collapse or “sudden wilt,” which is a more complex disease and a plant-stress-related syndrome. CMV may be seedborne to a limited extent in some crops and weeds such as common chickweed (Stellaria media). Good CMV-resistant (actually tolerant since plants are infected by the virus) cucumber varieties are commercially available and produce a high percentage of unmottled fruit. All other commercially grown cucurbits are susceptible to CMV, although in yellow summer squash varieties that also carry a “precocious yellow gene,” this gene serves to mask the color breaking common with cucurbit viruses (see discussion under WMV-2).

More information about virus diseases on squash and pumpkin: