In squash fields, Phytophthora capsici causes wilting, crown, root, and fruit rot, plant stunting and death. Since the disease results in a range of symptoms in squash it is often referred to as Phytophthora blight. Sporangia are formed on infected fruit and have a powdered sugar appearance. P. capsici is favored by rain and warm temperatures, and in the presence of water sporangia can differentiate into swimming zoospores. Water management has a high impact on disease development and surface irrigation water can be a source of zoospore spread. The pathogen has two mating types, A1 and A2, that form a survival thick-walled structure called the oospore when they come into contact. The oospore can overwinter in the soil and persist in infested soil for as long as 10 years. Watermelon and cucumber vines are typically less susceptible to P. capsici than squash. However, all  fruits are highly susceptible, especially if they are in direct contact with soil. 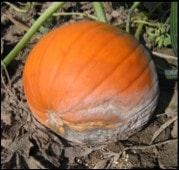 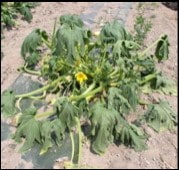