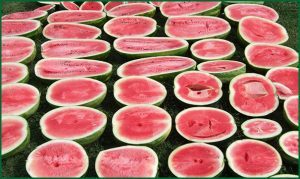 Watermelon is an important crop for human consumption with global production of 105 million tons in 2012 (FAOSTAT). China is the largest producer with 70 million tons (66.43% of total global production). In the U.S., the fresh market value was approximately $460 million in 2014, with production of over 1.45 billion kg grown on over 48,000 hectares (USDA Economic Research Service). Florida, Georgia, Texas, Arizona, and California are the major watermelon-producing states and account for about 44 percent of US watermelon production. Since the early years of the 21st century, seedless watermelons (triploid hybrid cultivars) have been the primary type grown commercially for the U.S. market (United States Department of Agriculture, National Agricultural Statistics Service 2016), accounting for 85 percent of total watermelon shipments in the United States in 2014. However, seeded (diploid) watermelons are still produced and consumed throughout the world, mainly in Asia, Africa, the Middle East, and South America. Because of the high cost of the seed and the difficulty in establishing a stand, seedless watermelon plants are traditionally transplanted into the field, as opposed to direct seeding. Priority diseases identified by US watermelon producers include: fusarium wilt, gummy stem blight, phytophtora fruit rot, powdery mildew, cucumber green mottle mosaic virus and the watermelon strain of papaya ringspot virus. 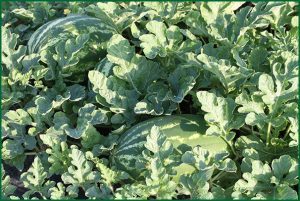